What Is an Epergne?

An epergne is a type of table centerpiece. The word epergne is derived from the french word "epaigner" which means to be "thrifty". This type of centerpiece contains small baskets that hold fruits, nuts, condiments, or other items that are meant to be shared with the table. Besides looking elegant, the epergne centerpiece allows food to be shared more easily and helps eliminate waste. 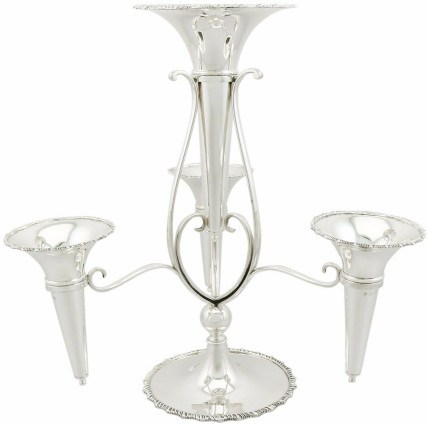 Silver epergnes were introduced in England during the George I era (r. 1714-1727). The first models were long and low. They had a bowl in the center with sweetmeat plates on each side. Some of the early models had candleholders.

Styles continued to change throughout the centuries. Epergnes shaped liked pagodas were popular in the 18th century. Centerpieces shaped like boats became popular in the later half of the 18th century. In the 19th century crystal bowls replaced silver bowls due to the lower cost. It was also in the 19th century when Sheffield plate became commonly substituted for solid silver to reduce cost.

One of the reasons why epgergnes became so popular was because of how elaborate some of the designs were. Silversmiths put a lot of effort into the designs. Oftentimes silversmiths made custom models for famous individuals. For example, Paul Lamerie designed one in 1794 for Count Bobrinksky of Russia. Lamerie also designed one for the Newdegate family.

In today's times epergnes are not commonly used at dinner tables. Dining room tables are much smaller than in past eras and there isn't much room for large centerpieces.