What Is a Pomander?

A pomander is a container that contains perfume or musk. The name comes from the french word "pomme d'ambre" which translates to apple of amber. The amber referred to ambergris, which diffused a pleasant smell when worn. A small bar of amergris or musk was stored in a small silver container which was either worn around the neck or hung from a girdle. The "pomme d'ambre" eventually became spelled "pomander" which is what these boxes are called today. 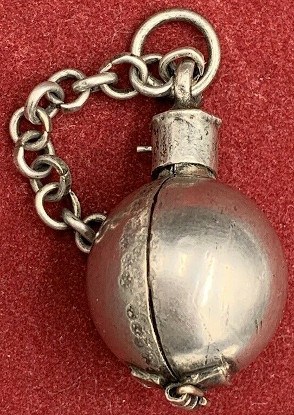 The original pomanders were used in the Middle Ages to protect against fever and to protect the olfactory nerves from foul odors. It's said that the pomander's general use was largely attributed to Cardinal Wolsey, a 16th century bishop. Wolsey filled an orange with a sponge soaked in vinegar, worm wood, and rosemary and spices. He carried this instrument everywhere he went. Silversmiths saw the need for such an item and they quickly started producing them in large quantities.

The silver vinaigrette is the more updated version of the pomander. Vinaigrette boxes were more stylish and they had better craftsmanship.