A chamberstick is a lighting appliance which consists of a small candle holder, a tray, and for older models a snuffer. The tray was used to catch wax that dripped from the candle. The snuffer was used to extinguish the flame. 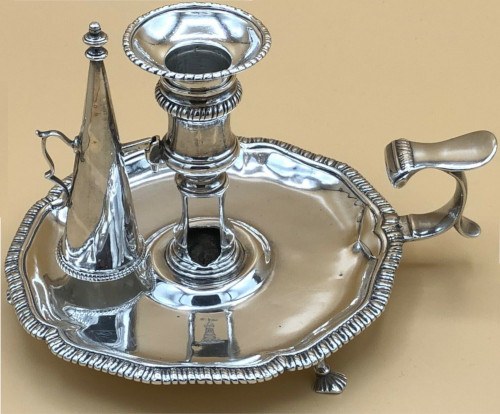 This lighting appliance was useful centuries ago before the light bulb was invented. With a chamberstick you could safely walk through long dark hallways and into your chamber (bedroom). The chamberstick could also illuminate your chamber at night. Wealthy families had staff that would clean the chambersticks and replace the candles.

One of the earliest known chambersticks was made in 1688 and this piece is on display at Exeter College in England. Pieces made before 1700 are very rare. The early pieces in existence are usually incomplete as many of the snuffers have become lost.

The earliest chambersticks were made of silver. Some of the later models were made of Sheffield plate, silver plate, or pewter. New models are still made to this day but they are mostly made for decorative purposes. Most of the new models are made of brass.

What Is a Wax Jack?