The Most Expensive Coins in the World

Note that our list only features coins that have been sold via public auction.

Why Are Some Coins so Expensive?

Coins carry a face value when they are minted. The face value is basically the amount of money the holder of the coin can expect to be given in exchange for it. But as all coin collectors know, there are many coins which are worth more than their face value, from just a few dollars to several millions of dollars. The main reason? Rarity. Rare coins are valuable coins. Of course not all rare coins are valuable because there needs to be a collector's market. Condition, design and historical significance are other important factors that collectors look for.

There are many reasons why coins become rare- from mistakes in the minting process, to political interference, to decisions taken by the Mint at the time. The reasons behind their value are sometimes more fascinating than the values themselves.

The Most Expensive Coins

Below you will find the list of the most expensive coins in the world. The same coin is not listed twice. If it has been sold twice then only the higher price is given. Coins sold by private transaction are not listed because their price can't always be verified. 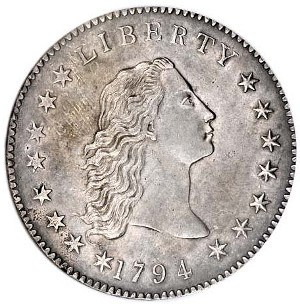 The amazing price-tag of this coin represents its unique place in American coin history. The Flowing Hair dollar was the first dollar coin ever minted by the new US Federal Mint, and features an image of Lady Liberty with flowing locks. The design was replaced in 1795 by the Draped Bust design, and there are estimated to be only 150-200 in existence. This particular coin is the only one to be in almost perfect condition. 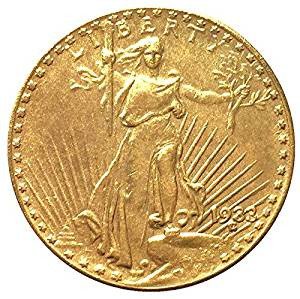 You can see this coin on our gold coin calculator, but it's worth much more than its weight in gold. In 1933, half a million gold $20 coins were pressed but never released. President F D Roosevelt, in an attempt to solve the banking crisis engulfing America, ordered all of the 1933 Saint-Gaudens Double Eagles to be recalled and melted down. A few - between 12 and 20 - somehow escaped from the Mint into the hands of collectors. They were never legalized and most collectors surrendered them. They are still illegal- all except one, originally owned by King Farouk of Egypt. A legal battle between the former owner and the Mint resulted in the coin being sold and the proceeds split between the parties. The buyer had to pay $20 to legalize his coin. 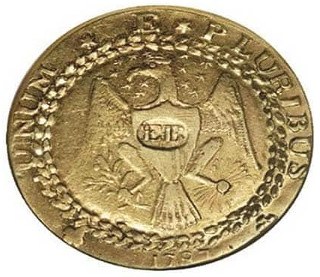 Ephraim Brasher was a silversmith who lived in New York. He designed the New York doubloon which featured an eagle on the reverse. On one of the known specimens of this coin, Brasher stamped the letters 'EB' on the eagle's breast. On the other six known coins, the initials were placed at slightly different positions on the eagle's wing. 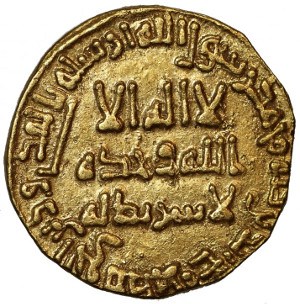 The 723 Umayyad gold dinar was minted by the Umayyad Caliphate, one of four caliphates that were established soon after the death of the prophet Muhammad. At the height of its power, the caliphate ruled 29% of the world's population. 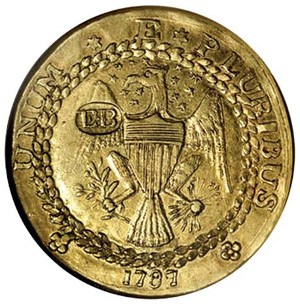 Here is the 1787 Brasher Doubloon coin with the initials 'EB' imprinted on the eagle's wing. 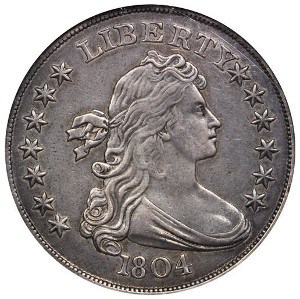 This 1804 Draped Bust dollar is considered to be the finest example of the famous Draped Bust silver dollar coins. Five of the eight in existence are privately-owned, and three are in museums.

Only 15 of these dollar coins are known to exist. None of them were in fact minted in 1804, but actually 30 years later. In 1834, the US government wanted sets of proof coins to present to foreign dignitaries in the Far East. No silver dollars had been minted since 1804, and these coins had no date since they coins had been struck the previous year. The coins included in the special sets carried the date 1804, which instantly made them rare. 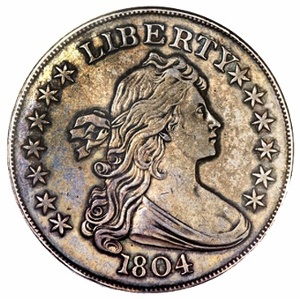 The name denotes some of the previous owners of this particular coin. The previous owners included royalty such as the King of Siam (present day Thailand) and the Sultan of Muscat in present-day Oman, as well as businessmen and wealthy coin collectors. 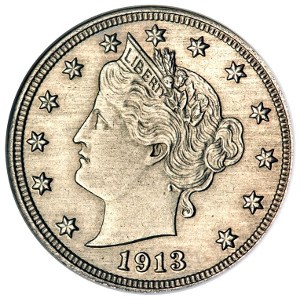 Also known as the 'King of 20th century coins', the 1913 Liberty Head nickel is one of only five known to exist. It had a central role in the TV crime series 'Hawaii Five-O' in 1973 so it's probably one of the most famous coins in the United States. The coin only appeared in close-up shots and a 'double' was used in the rest of filming. Four years after the auction it was subsequently sold in January 2014 for $3,290,000- a loss of almost $500,000.

Yet another 1804 Draped Bust dollar, this specific coin was once owned by James V. Dexter. This man was a wealthy coin collector who owned the coin for 14 years. He had a tiny 'D' stamped on one of the clouds on the back.

There are still rare coins in circulation. They are less valuable than these examples, but they can still be worth a lot of money. If you want to find valuable coins then we have some resources for you. Check out our articles on where to find old coins, coin roll hunting tips, and metal detecting tips.